By the end of last year the „Horrorklinik“, a famous German website for costumes & accessories related to Halloween, gave me the chance to do an interview. 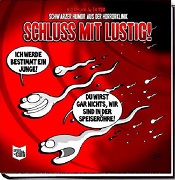 As they were just about to publish their latest comic book, we had the idea to also do a giveaway and raffle off one of my creations. So I decided to exclusively design a NomNom monster inspired by their comics. 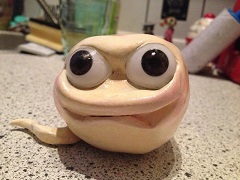 As an inspiration I chose a rather unusual character, featured on the cover of their latest issue: a little sperm. I initially opted for the sperm for two main reasons: First, because as a model it is so far removed from the themes I usually work with, both visually/stylistically and thematically. Since the character is depicted rather bland in the comic, I didn’t want to turn him into a ferocious monster. For a change of pace I gave him the cute treatment instead – rosy cheeks in lieu of bloody fangs. The other reason for my decision was the naive notion that it would be less complicated then say a more refined character. As you can imagine, creating a monster is a lot of work. 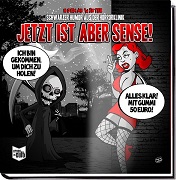 Not only does the clay need to dry several days, coloring and shaping alone can take up to two weeks! So I was quite in a hurry to meet the deadline and finish everything before the holiday seasons.  As it turned out, this task was a lot more challenging than I expected. The tail in particular gave me quite a headache: thin and elongated elements generally turn out to be very fragile and I had to consider transportation as well. After some deliberation I decided to bypass this problem by coiling the tail next to the head.

Around Christmas the little guy was all done and I – after my initial period of doubt – satisfied with my work. I carefully wrapped him up and sent him over to the „Horrorklinik“, then left town for my highly anticipated vacation at my boyfriend’s parents’ house. We had a great and contemplative time altogether, but just after Christmas Eve a terrible message reached my mailbox. My contact at the “Horrorklinik” told me that despite my best efforts to prevent it, the sperm´s tail apparently broke apart during shipment, while the winner of the competition had already been notified. What a shock!

On one hand I was extremely flattered, because more than 100 people had entered the giveaway. But I also felt devastated and mourned the death of my little protein tadpole: What should I do? The little sperm didn´t make it! I guess after all he wasn´t fertile enough to reach his final goal and sustain the seed of life.
At that time I wasn´t home and therefore couldn´t work, and thought there was no time to make a new sperm. And even if I were to start over, there was still this lingering fear in me that the new one might not survive transportation either. 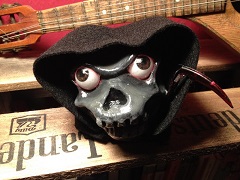 After calming down and another short e-mail exchange we all decided to give it another shot, this time with a different character. Back home I began working on the new project. To make sure the figure would be more sturdy, I chose “Death”, also prominently featured in the comics, to be my next monster. The head was shaped just like a skull, with my signature NomNom eyes as the only vivid element. As a prop I included a miniature scythe, originally intended for nativity sets, a German Christmas tradition. Using red paint, I sprinkled little blood stains on the blade. As a finishing touch I designed and cut out a small black cloak from a piece of cloth and wrapped it around the figurine. Scythe and cloak are universally recognized as the grim reaper’s defining accessories after all!

Despite having put a lot more time and effort into the figurine than originally planned, I was very pleased with the results. Death bravely defied the dangers of transportation and reached his destination in pristine condition, where he continues to instill fear and terror in the puny heart of his new owner.

While it was definitely stressful at the time, everything worked out in the end. Looking back, I appreciate the opportunity to challenge myself artistically. Though I find it a bit ironic that I intended to spare myself some effort by choosing the plain sperm but ended up making the way more elaborate Death on top of that. I guess that just goes to show that it is next to impossible to properly plan these things – more often than not artistic endeavors are inherently uncontrollable. And I'm glad they are. For just as destruction precedes creation, a little chaos can be very stimulating.

In the end I can say I kind of created life and death at the same time. While the seed of life wasn't strong enough to make it, “Death“survived…I guess that´s just the circle of life.